The defendant in the case, a family practitioner in Wisconsin, provided prenatal care for an expectant mother in early 2012. On May 15 that year, due to the mother’s hypertension, the doctor decided to induce labor using the drug Cytotec. According to the plaintiff’s attorney, that was where the tragic chain of events began.

“Choosing to induce labor was not negligent in itself, but the medication was given incorrectly,” said attorney Jeffrey M. Goldberg, who represented the family in the malpractice lawsuit. “Cytotec can be administered either orally or vaginally, and the appropriate dosage varies widely depending on the route. The doctor administered the medication vaginally but gave the much higher oral dosage, causing excessive uterine contractions and ultimately fetal distress.”

According to Goldberg, the defendant doctor then chose to stop monitoring the fetus for four hours after the drug was administered.

The incorrect dosage of Cytotec, failure to monitor and failure to order a C-section in a timely manner constituted clear negligence on the doctor’s part, said Goldberg, and the consequences for the victim’s life are catastrophic.

“As a result of the doctor’s negligence, this child – now six years old – has severe cerebral palsy. He is physically disabled and needs extensive physical therapy. He cannot speak. And he will need full-time assistance for the rest of his life.”

Goldberg expressed hope that this settlement will help the victim maximize his quality of life – and send a strong message to other physicians.

“There’s really no amount of money that can truly compensate for a catastrophic injury such as this, but this child will be taken care of for the rest of his life,” said Goldberg.“ Our hope is that cases like this will help to protect other Wisconsin families from going through the same ordeal.”

The family was represented by Goldberg and attorney Jeffrey Schulkin, both of Goldberg & Schulkin Law Offices. 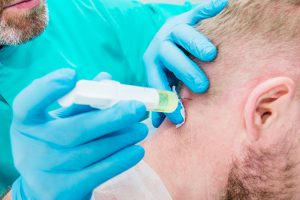